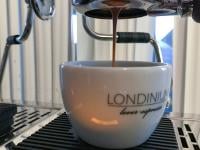 Ron Lewen
March 2017 in LONDINIUM owners' modifications and ideas
I saw this on Kickstarter. I'm all for gadgets, but is a special spoon really necessary to stir espresso?