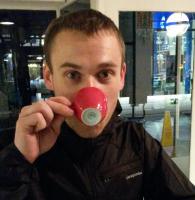 Checking in because I'm having an issue with my L1, and after giving it a quick once over I'm not sure what to try. Apologies in advance if I'm vague, I'll try to upload a video if possible to help.

The L1 had been on most of the day when I came to it found the pump making an unusual noise (more sputtering than anything I've heard it do before), and water leaking from under the unit. I shut the machine off, checked that there was water in the tank, which there was.

After cleaning up and a cool down, I switched the machine on and as it started to build pressure, water began to spill from the anti-vac valve. I assumed that my boiler had overfilled, which seemed likely given we've very soft water here and it has done this once before, maybe 18 months ago.

I opened the hot water tap and emptied the boiler (at length) until the pump came on, which it did for a little while before switching off and the low water alarm came on (plenty of water in the tank). However, I now had a new leak of water around the bottom of the pump and leaking under the unit - too much to have been from the small anti-vac leak that started before I opened the hot water tap.

I'm at a bit of a loss now, so thanks in advance for for your help!